A small piece of work connected with the London Borough of Brent led me to think about some other Brents: specifically, the river, the geese, the oil field, and the price of crude. Any connections or none? I decided to take myself out for a little research training gallop.

The borough, the river and the goddess Brigantia

Brent is a borough in the north-west of London. It’s been in existence since 1964 and is in outer London. Kilburn, Wembley, Harlesden are three well-known areas. [1]

The borough is named after the River Brent, a tributary of the River Thames. The river is almost 18 miles long and joins the Thames at Brentford. [2]

The earliest record of Brentford (and of the river) is in a letter of 705 AD when the Bishop of London suggested meeting at Breġuntford. The date suggests that this placename may be related to the Celtic *brigant– meaning ‘high’ or ‘elevated’, perhaps linked to the goddess Brigantia. [3]

The geese and the oilfield

The Brent Goose, Branta bernicla (Linnaeus 1758), is a small, dark goose, about the same size as a mallard. The head is black and the neck and back are grey-brown. The belly is either a pale or dark belly, depending on the sub-species. Adults have a small white neck patch. [4]

Here, the word ‘brent’ is derived from the Norse word ‘brendr’, meaning burnt. The geese have this name because of their charcoal colour. [5]

Brent geese nest on boggy Arctic tundra where they have a few months of good weather to raise a brood before the weather turns bad. They migrate south from mid-September and those which over-winter in Britain and Ireland arrive in large flocks in early October. They spend the winter feeding on eelgrass in estuaries and on crops in nearby fields. In April they fly north to the Arctic once again.

Listen to Brent geese here (scroll down a bit).

The Brent oil and gas field lies in the North Sea between Shetland and Norway and is named after the Brent goose. The field is operated by Shell UK Ltd which initially named all of its UK oil fields after seabirds, alphabetically by discovery – Auk, Brent, Cormorant, Dunlin, Eider, Fulmar and so on. The initials of the Brent field were then used in naming the parts of the Middle Jurassic geological period which make up the oilfield. These are the Broom, Rannoch, Etive, Ness and Tarbert formations, each named after a Scottish loch. Sensible from an oil-and-gas perspective perhaps but a little surprising for someone on a morning outing. [6]

The Brent oil field ended production at the end of February 2011, and is being decommissioned over the next 25 years. [7]

And the price of Brent Crude

We hear the term ‘Brent Crude’ in the financial part of the news. ‘And the price of Brent Crude is …’  So what is it and why is it important?

Brent Crude is a trading classification of sweet, light crude oil. [8] This type of oil was originally produced from the Brent oilfield in the North Sea and now comprises Brent Blend, Forties Blend, Oseberg and Ekofisk crudes. The classification is also known as the BFOE Quotation. It’s a benchmark crude which provides a reference price for buying and selling. Around two-thirds of the world’s oil is priced relative to it. [9] 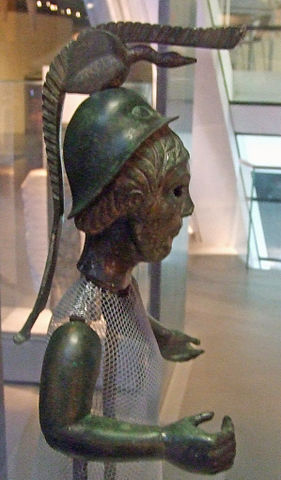 This is a first century AD bronze statuette of a female goddess, possibly Brigantia. The statuette is in the Museum of Brittany at Rennes (F) where she is known as Brigitte. Remarkably, from my point of view for this post, she is wearing a helmet surmounted by a goose or swan with outstretched head and wings. The helmet also has an extremely long crest.

In etymology as in the rest of life, I do know that all may not be what it seems at first glance. There is no link between Brigantia and the Brent goose. All that glisters is not gold.

I rather like, though, how the headgear of a goddess who might possibly be Brigantia but perhaps is not, can unexpectedly draw together the findings of this small research exercise. Unexpected romance.

The Brent Geese at the top of the page are Ringgås in Lista, Norway photographed by Marton Berntsen. (Own work) [CC BY-SA 4.0 (http://creativecommons.org/licenses/by-sa/4.0)%5D, via Wikimedia Commons.

In April I began to evaluate a strategic programme running across the 32 London boroughs. Yes, a lot of places, people and paperwork were on the horizon. I decided that this was a good opportunity to try out Scrivener properly.

I chose the non-fiction template for the binder. It seemed the most appropriate. There’s a file called ‘Manuscript’ which I liked the sound of, so I decided that I’d use it for work in progress and the final report. You can have different folders (chapters) and sub-sections within each one. I wasn’t sure what I was going to need but I opened a number of folders and added some sub-sections, just in case.

I changed file icons and their names. As well as ‘Manuscript’, the non-fiction template has files called ‘Notes’, ‘Ideas’ and ‘Research’, all with different clever icons. You can change them (Documents/Change Icon).  I decided clever ones would distract me so I made the icons very plain – just a folder and text. And I changed the file names to useful ones for me: ‘Admin’, ‘Interviews’, ‘To read’ – that kind of thing.

I dragged reference documents into the binder. The first of these was a map of the boroughs. I knew I’d be referring to it and I put it into the ‘To read’ folder. There were many more reference documents – reports from this place, publications from that place, and other bits and pieces. Importing documents of different kinds directly and easily into the binder is a very good thing about Scrivener. (I’ve just exported the map from the Evaluation binder via the desktop into my Blog binder. All very straightforward.)

I changed the fonts to ones which worked for me. I didn’t get this right straightaway so I tried out a few ideas as I wrote. I’m using Calibri 14pt as the body font at present. I find it spacious and airy and it gives me room to think.

Interviews came next – lots of them. I conducted them, wrote them up and put them in the ‘Interviews’ folder. Later, I’d copy bits into the working document and hack them about a bit. That’s all possible with Scrivener.

What I’ve described here was done in scrivenings mode. I tried out the corkboard mode which allows you to view each folder’s sub-sections, make notes on what each contains and move them about. I found it didn’t work for me – at least with this piece of work. Perhaps next time.

At one point I had 30,000 words or so in the manuscript. You can easily see the word count for the whole manuscript, each folder and each sub-section. I worked through it and produced a first draft of around 11,500. Then I compiled it and shifted it over to Word. It took a few tries to get the compiling right but at last it wasn’t too bad. Except it was in Word.

Cinderella! The clock had struck 12 and my sparkling prose seemed to have turned to dust. And there was still Word formatting to be done.

It was just a trick of the light, of course. After formatting, the draft was OK. But it didn’t seem quite the same.

This evaluation had a good structure: strong and flexible. It allowed for interesting leads to be followed and for the work to evolve. Scrivener really lent itself to this as I moved sub-sections around, tried out new chapters and scrapped ideas which didn’t work. And it worked well as I cut the whole thing down to around 3,000 words for another version.

I’ll be working with it again. I call it ‘Scriv’ now, for friendliness.

Writer and researcher since 1987